Allografts, or tissues transplanted between different members of the same species, actually have their historical background in antiquity. Cosmas and Damian are considered the patron saints of al-lograft surgery. They were twin brothers and physicians credited with the third century grafting of a deceased Ethiopian’s leg to one of their patients whose leg had ulcerated. Lexer, in 1908, pub-lished on 23 whole- and 11 hemi-joint transplants. Herndon and Chase, in 1954, discovered that the immunogenicity of allografts could be diminished by a freezing process.

Mankin and others published in 1983 the results of their study using fresh frozen osteoarticular and intercalary allografts for transplantation. The reader may find it surprising that the first scientific arti-cle I ever published, in Clinical Orthopaedics and Related Research in 1987, was entitled “The Use of Large Allografts for Tumor Reconstruction and Salvage of the Failed Total Hip Arthroplasty.” So you can see, while I am pretty old and have been writing on this subject for a long time, I am not quite as old as Saints Cosmas and Damian.

The indications for the use of large allografts for the reconstruction of the ankle and hindfoot include avascular necrosis of the talus, neuroarthropathy, infection, and tumor. Commonly today, large allo-grafts are used in salvage of the failed total ankle arthroplasty or failed ankle arthrodesis, as well as in the treatment of primary osteoarthrosis and rheumatoid and inflammatory arthritis.

We really only have a few viable alternatives as reconstructive options for cases of massive bone loss about the foot and ankle (figure 1). Take for example, the case of a 62-year-old hairdresser with idiopathic avascular necrosis of the talus. She was left with a very large bony defect in her hindfoot and ankle after the excision of this completely nonviable talar body (figure 2). Viable recon-structive options included tibiocalcaneal versus tibiotalocalcaneal arthrodesis with allograft (figure 3). In this particular case, the patient was reconstructed with tibiocalcaneal arthrodesis, retaining the talar head and neck and using a local autograft. Medullary nail and screw fixation was used for reconstruction and achieving arthrodesis in a plantigrade, viable, stable foot (figure 4).

The advantages of having a tibiocalcaneal fusion in this patient included the fact that all the tissues were autogenous and not foreign; therefore, the patient had a lower nonunion risk than if a large bulk allograft had been transplanted. This also became a more expedient procedure with a quicker recov-ery. Disadvantages of a tibiocalcaneal fusion in cases such as hers include a shorter limb and al-tered biomechanics and gait. There is also a certain amount of soft tissue redundancy when the skeletal mass is foreshortened relative to the soft tissues.

One can make the case for large allografts in transplantation when considering the case of a 69-year -old female who had a revision total ankle replacement as far back as 2008 that went on to prosthet-ic loosening, subsidence, and failure (figure 5). This patient’s ankle and hindfoot were salvaged with tibiotalocalcaneal fusion using a large femoral head allograft. The surgical technique for a TTC fu-sion using a large femoral head allograft is as follows. In the operating room the patient is positioned prone with general or spinal anesthesia and using regional nerve block for postoperative pain relief. A posterior Achilles-splitting approach is used and the failed ankle replacement components are re-moved (figure 6). Acetabular reamers are used to prepare the fusion surfaces and the slurry of bone harvested is saved to be used as part of the graft (figure 7). The femoral head allograft is prepared outside the wound and it often helps to use the reverse concave reamers to get an absolute spheri-cal fit. Multiple drill holes and fenestrations are made to encourage bony ingrowth and healing (figures 8&9). An infusion of iliac crest aspirate is added to this and the femoral head allograft is placed in the bony defect in the patient’s hindfoot and ankle (Figure 10). A press fit is obtained with the foot in a plantigrade, neutral posture before internal fixation, in this case with a medullary ankle fusion nail and locking screws (figures 11&12). 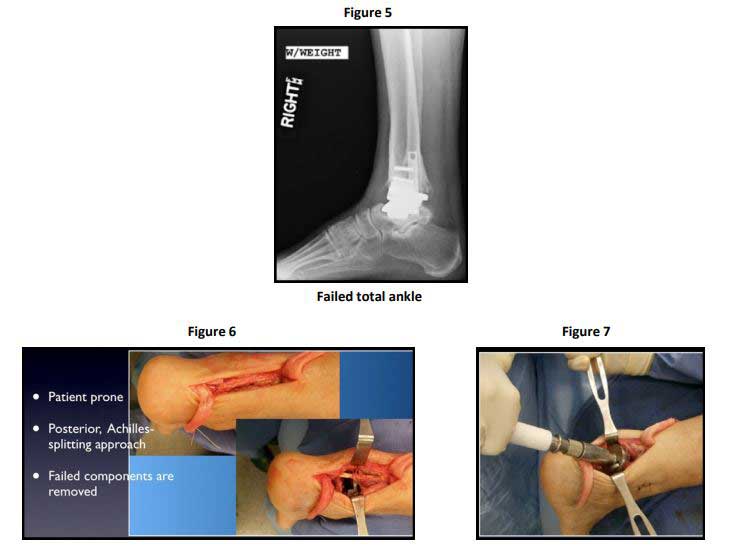 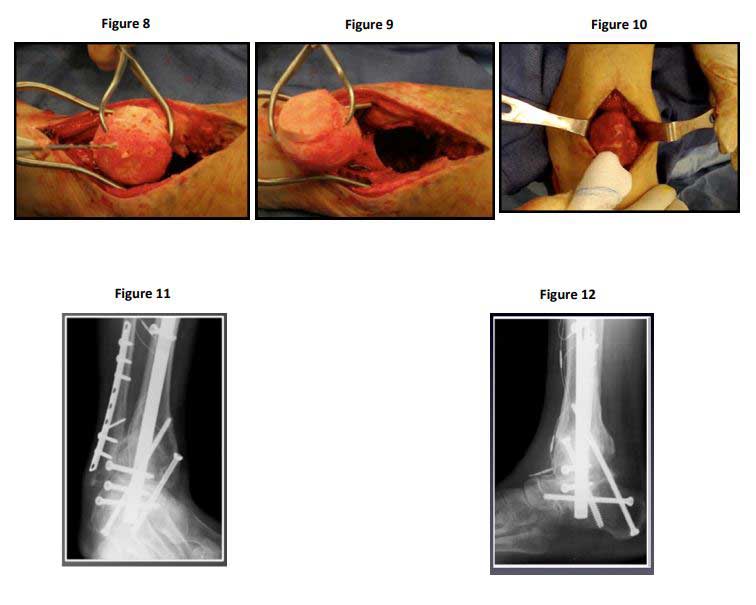 The advantage of using a large allograft for a TTC fusion is that limb length is maintained and the biomechanics are improved. This technique has been used to salvage many limbs, which heretofore was only possible with amputation. The disadvantage of using a large allograft for tibiotalocalcaneal fusion includes the very slight potential for disease transmission from the donating host and the fact that this is a technically demanding procedure. Bulk allograft does require a very long time for con-solidation within the recipient.

In summary, it is an exciting time to be involved in orthobiologic research and, while allograft bone and soft tissue transplantation does date to antiquity, most of the practical advances in the use of this for foot and ankle reconstruction have taken place over the last decade or two.