In recent years there has been much written and discussed regarding the issue of implant sizing in knee replacement surgery. Much of this has stemmed from an aggressive marketing program by one of the larger implant manufacturers. As a result of this marketing, there has been more attention devoted to this issue in lay media than in scientific orthopedic journal and articles. The result is the public dissemination of misconceptions and mistruths about an issue at the very heart of knee replacement surgery.

The first routinely successful knee replacements evolved in the early 1980’s. At that time manufactures offered implants to surgeons and their patients that did little more than cover the surface of the distal femur and proximal tibia to rid the patient of the painful arthritic joint surfaces. The implants of that era were designed with little understanding of how the knee functioned or moved. Over the next two decades as experience was gained and the science of knee replacement surgery advanced, design improvements followed. Dramatic improvements were made in the design of the patellofemoral joint (kneecap joint). The surfaces of the implants were contoured to be more anatomic. This provided for a replacement knee with greater range of motion and more normal function. The design of the polyethylene plastic insert that in effect becomes the new cushion in the knee was improved and more options offered. This change allowed the surgeon to more easily tighten and balance the ligaments of the knee that control stability and motion. While these major changes evolved, little attention was paid to actual implant sizing issues. Surgeons recognized that intraoperative compromises were routinely required so as to make the patient’s anatomy fit available implant sizes rather than having a specific appropriately sized implant available to fit the patient. And it became clear that the compromises in implant sizing were adversely affecting outcomes. Thus in the late 1990’s surgeons began demanding more and better sizing options so as to further improve on an operation that had overall become very successful. Not surprisingly, implant manufactures began to respond to this demand. As a result the last decade has been witness to an explosion of research and better understanding by implant manufacturers and surgeons alike of what is needed in terms of knee implant sizing to best fit all patients. Differences in size and anatomy were discovered between the tall and the short patient, between heavy and thin patient, and between female and male patient. And manufactures developed a sizing variety that fit all these “customers”.

As a result of the above enlightenment, the last decade has produced knee implant systems that are more appropriately sized for body type and gender. It is now known, for instance, that the average female knee is narrower from side to side than that of their otherwise similarly sized male counterpart. And it is now appreciated that inappropriately sized implants can cause prolonged postoperative soft tissue soreness about the knee. As these anatomic facts and differences became understood, the major implant manufacturers began one by one to revise their inventory of implant sizes available to surgeons for use in their patients. Implant manufacturing companies have as much as doubled the available sizing inventory. The anterior – posterior (front to back) to medial – lateral (side to side) sizing ratios have been altered to fit both female and male patients of all shapes and sizes. “In-between” sizes are offered. The result is that all major implant manufacturers now offer an array of implant sizes that can appropriately fit all patients of both sexes of all body type. 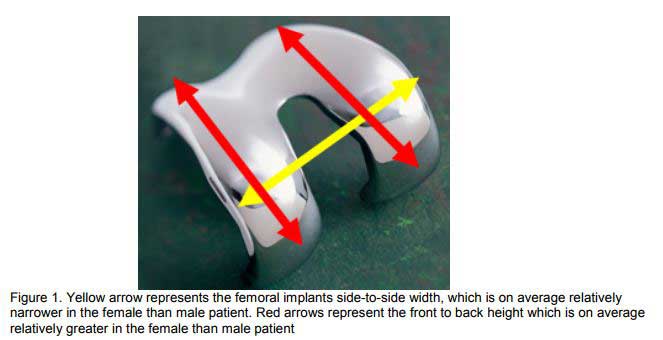 Choosing the Appropriately Sized Implant for Each Gender and All Body Types:

Though preoperative planning based on x-rays and MRIs can be helpful, final decision making regarding individual patient implant sizing occurs during surgery. Each manufacturer has designed a tool used in surgery to best measure the height and width of the knee. After these dimensions are known, the proper implant is selected. For instance, though the average female knee is taller from front to back than it is wide relative to the average male knee, not all female knees are so shaped. The same is true in the reverse for the male knee. Thus instead of selecting the “female knee” for the female patient and the “male knee” for the male patient, in actual practice the surgeon chooses the knee that fits the best no matter what the gender.

The Era of Marketing (Or Image is Everything):

Two things have changed in the last decade of total knee replacement implant designs. First, all manufacturers have indeed produced implant sizes which now fit the vast majority of patients without forcing the surgeon to make compromises in sizing that could affect the postoperative outcome. Second, in the modern era of hype and marketing, one specific manufacturer has attempted to capture this issue as their own by making unsubstantiated claims of superior sizing and design. And instead of following the conventional path of scientifically proving such claims in studies published in the medical literature, this particular manufacturer has instead gone straight to the public with a heavy marketing program bypassing accepted scientific methods. Indeed some of the design changes implemented by this particular manufacturer are controversial. For instance, the narrower patellofemoral joint (kneecap joint) design of this particular “gender specific knee” is closely reminiscent of failed designs of the 1980s when problems of patellar stability and tracking were common.

The results of this particular manufactures design and marketing efforts have been mixed. Public awareness regarding issues of implant design has been raised. Most patients however accept their surgeons explanation that an implant manufacturer claiming to have cornered the market on appropriate implant sizing is analogous to a shoe manufacturer claiming to have cornered the market on the size 8 ½ shoe. Or more simply this is just another example of “ better tasting vs. better ingredients” advertising that we see in the media daily. The fact of the matter is that despite heavy advertising, the manufacturer marketing their “female” gender specific knee has steadily lost market share since its inception.

What is Important to the Patient:

No one implant manufacturer has scientifically demonstrated that their system is more appropriately sized or obtains better results than another. All manufacturers have designed high flexion knees that function well in high demand situations. The biggest differences between implant systems are the instrument systems by which the components are implanted and issues of service by the distributor. It is the development of low profile instrument systems that allow the surgeon to perform the procedure in a minimally invasive manner to allow for a shorter recovery time.

Advice to prospective knee replacement patients: choose your surgeon. Let your surgeon chose you implant. That is the best advice to achieve an excellent long term result to which all aspire.