HOW THE NORMAL KNEE WORKS:
It is a common misconception that the human knee functions as a simple hinge joint, with straight up and down flexion and extension. In reality the motion of the knee is much more complex, with six degrees of motion (not just the two of a hinge). As the knee bends and straightens, it also rotates internally and externally and slides front to back. Traditional total knee replacement designs have never been able to recreate the complex movement necessary for the knee to feel and function normally, especially in the high demand situations of a physical job or performing athletics. 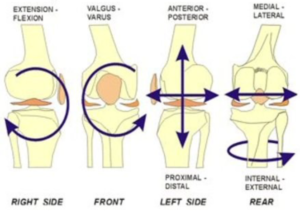 The Journey II Knee is a revolutionary new knee replacement design. It incorporates several new design changes, the most significant of which is Medial Pivot design. These design changes include:

MEDIAL PIVOT DESIGN: A revolutionary new concept. It is the first true major design advancement in knee replacement surgery in decades. The Medial Pivot Design is the first TKR design to incorporate all 6 degrees of motion of the natural knee. It does so by creating a “cupped” almost ball-in-socket articulation between the plastic and the femur on the medial side of the joint (blue arrow) and a flat articulation between the plastic and the femur on the lateral side joint (red arrow). The resultant kinematics (mechanics) are such that the “ball in socket” articula-tion on the inside of the joint keeps the femur centered in one spot as the knee bends, while the “flat” articulation on the outside of the knee allows lateral femur to glide backwards and rotate like the normal knee. The result: normal kinematics are restored in the Medial Pivot Design TKR.

NORMAL ANATOMY RESTORED: The Journey II re-establishes the subtleties of normal joint line anatomy (which are altered by the arthritis process and not corrected by conventional TKR surgery. 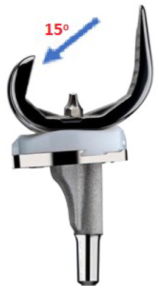 IMPROVED QUADRICEPS STRENGTH: The Journey II, as opposed to other TKR designs, moves the contact point between the
femur and the tibia forward to its normal position (blue arrow right as compared to orange arrow of traditional TKA designs). Reestablishing this forward contact point results in increased quadriceps strength (like being on the long end of a teeter-totter)
GREATER RANGE OF MOTION: The Journey II design changes the anatomy of the back of the femoral component to mimic that of the normal knee (blue arrow left). The result is to provide for an extra 15 degrees of flexion versus what is expected in a conventional TKR. The cumulative result of
these design changes of the Journey II TKR is that patients experience a knee replacement with improved kinematics, speedier recovery, better ultimate range of motion, enhanced stability, and ultimate functional ability for high demand situations at full recovery.

Design Limitations of Past Conventional TKRs
Conventional knee replacements work well at what they are designed to do: rid the patient of arthritis and provide a new artificial knee that will function adequately. As TKR surgery has expanded into younger more active age groups who place a higher demand on their new knee, the goal of only eliminating arthritic pain is no longer sufficient. Design limitations of the conventional knee replacement that can inhibit the return to normal functioning and can lead to patient dissatisfaction include:
1. ABNORMAL KINEMATICS: The knee is NOT a hinge. A conventional knee replacement forces the knee to flex and extend like a hinge on a door, with a straight simple up and down motion. The normal knee, however, does not function like a hinge. Instead, as it bends and straightens, there is flowing rotation and front to back sliding to its kinematics. Only the Journey II TKA recreates these kinematic movements.
2. ALTERED ANATOMY: With conventional knee replacement surgery, anatomy of the knee is altered in several ways. When looking at a normal knee from the front, the joint line is not perpendicular to the tibia as it is with conventional TKR surgery, but instead is at a slight angle with the inside of the joint being slightly lower than the outside. To compensate, the femur must be correspondingly rotated to keep the ligaments balanced. This can
lead to abnormal forces on the knee, creating sensations of instability, dissatisfaction, and potential early failure of the knee replacement.
3. DIMINISHED QUADRICEPS STRENGTH: In conventional TKR surgery the contact point between the femur and tibia is shifted towards the back of the knee. This shift causes abnormal (called “paradoxical”) motion to occur when the knee starts to bend. The mechanical effect is that the strength of the quadriceps muscle is weakened. This is of clinical importance as a patient with a conventional TKR attempts to squat, climb steps, or perform other high demand activities.

Results of Conventional TKR Surgery Design Limitations: The result of the limitations noted above is that the ligaments and capsule of the knee see an altered knee anatomy, altered knee kinematics, and a weakened quadriceps muscle. This can cause a range of problems from: