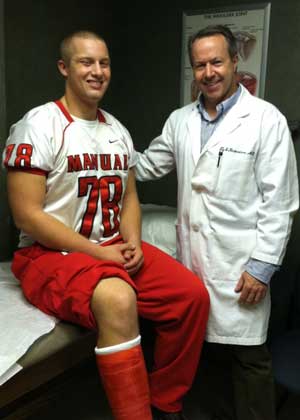 As sports medicine physicians we are occasionally reminded that football is a contact sport. The majority of time that I spent on the sidelines with the Manual football team over the last nine years, I have been treating sprains, strains, and possible concussions, but around once a season we have a significant injury which occurs.

George Dailey was a senior offensive lineman for the Manual Crimsons and on the night of November 15th in the last playoff game against Trinity High School, on the last drive of the game, a Trinity lineman lost his balance and rolled on George’s right ankle. He suffered a significant injury. I could tell by the reaction of the players around him that it was bad and was running onto the field before the play was even over. He had suffered a fracture and dislocation of his right ankle. Basically, his right foot was pointing out around a 90 degree angle to the way his right knee was pointing. I had to reduce his ankle on the field and place him into a splint. I then accompanied George and his parents to the Baptist East Emergency Room to view the x-rays. Indeed, there was a significant fracture and an unstable dislocation. He was scheduled for surgery the following morning and underwent internal fixation of his ankle and syndesmosis. Mr. Dailey has done very well during his postoperative period and at around five months after surgery he was jogging, had excellent range of motion, and had all of the hardware, or the plate and screws, removed from his ankle. George wishes to attend a military academy following his graduation from Manual High School, which is appropriate. His on-field nickname was “the general.” This is appropriate due to the fact that he was constantly barking out orders to the younger and less experienced lineman and was also usually the one rallying the troops when times were tough.

Both I and the staff at Louisville Orthopaedic Clinic wish Mr. Dailey the best of luck in his future athletic endeavors. He would like to try to rehab his ankle for another year and possibly try to walk onto the football team at a later date at one of the military academies.