Total knee replacement surgery has become a highly successful operative procedure. Recent advances in minimally invasive techniques have shortened the rehabilitation period while advances in implant design have improved overall clinical results. Patients with successful knee replacements, however, often subjectively feel that even though their knee is pain free that it is still not “normal”. This is in part due to the fact that the anterior cruciate ligament (ACL) is necessarily sacrificed in all complete knee replacements. The result is that the artificial knee does not have the same stability or kinematics through the arc of motion as a normal knee.

Anatomy of the Arthritic Knee

Anatomically the knee is divided into three distinct “compartments”. The arthritic process usually affects all three. The three compartments of the knee include: 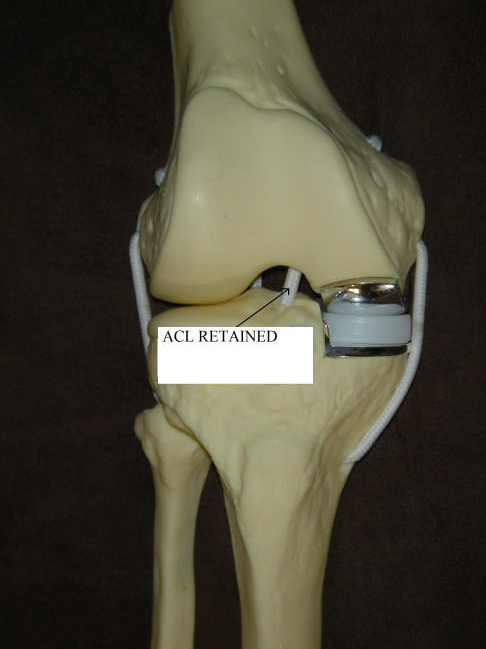 As previously mentioned, coexisting significant lateral compartment arthritic disease is the major contraindication to medial compartment hemi knee replacement. Patellofemoral disease, if not severe, is not an absolute contraindication. However symptoms related to the patellofemoral joint will not be relieved by hemi replacement surgery. Arthritic kneecap symptoms generally include anterior knee pain accentuated by squatting or stair climbing.

Also, the anterior cruciate ligament (ACL) must be intact. A patient with a previous disruption of the ACL is not a candidate for hemi replacement surgery.

Over the last 25 years the results of cemented partial replacements have not been so predictable and durable. Early implant loosening over the first two to three years, particularly of the tibial component, has been noted to sometimes occur. The primary reason for this increased loosening risk appears to be due to the fact that the cemented surface area of the hemi knee to bone is much smaller (less than half) than that of the full replacement. As the forces of weight bearing and activity are distributed over this smaller surface area, the cement bond of the implant to bone can occasionally be overwhelmed and lead to early loosening. Early implant loosening does not occur in every case or in even most cases, but it does occur with enough frequency to make some surgeons hesitant in recommending partial knee replacement as a surgical option. Meanwhile, the quest has been continued to eliminate this risk by finding a method of reducing the stresses on the bone cement interface.

A second risk unique to partial knee replacements is the potential for accelerated polyethylene “plastic” wear. The plastic polyethylene “cushion” between the femoral and tibial implants of a full replacement typically will wear down to the point of requiring a fairly simple plastic exchange in 10 to 12 years. Historically polyethylene wear occurs at a faster rate in the partial knee. In an effort to protect the bone cement interface and reduce shear forces to which it may be subjected, tibial polyethylene plastic designs are usually made relatively flat. These flat plastic articulations, though probably protective of the cement, have been found to increase the rate of wear of the tibial polyethylene bearing surface over that found with a more curved conforming articulation. 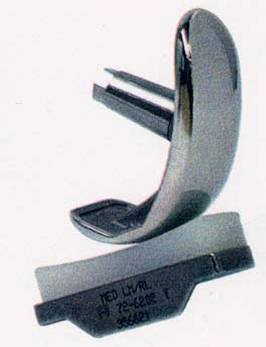 There are several potential significant advantages of hemi knee replacement surgery. They include:

The Mobile Bearing Replacement:
A Potential Solution to Partial Problems

An implant has been designed to address the potential hemi compartmental knee replacement problems of early implant loosening and accelerated polyethylene wear. This implant is the Oxford Mobile Bearing Partial Knee. Developed by surgeons in Oxford, England almost 20 years ago, it was released by the FDA for use in the United States in April of 2004. The Oxford group has long term clinical data demonstrating the increased durability and dependability of the mobile bearing design.

There are two major differences between the Oxford Knee and other hemi knee replacements. These include: 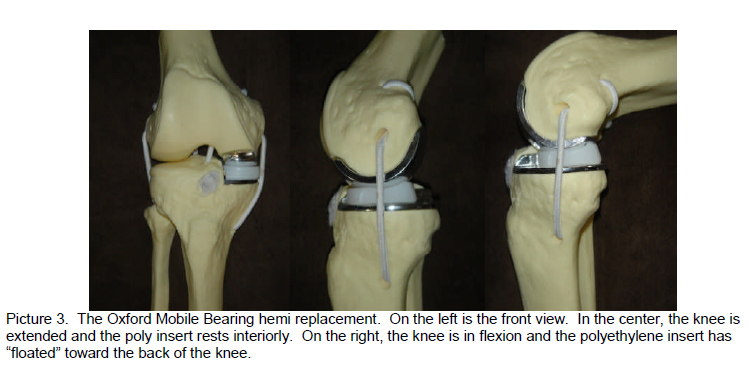 The Oxford group has reported clear data that demonstrates the successfulness of the mobile bearing design concept. The problem of poly (plastic) wear seems to largely be eliminated. The demonstrated wear rate is extremely slow. The problem of loosening has similarly found to be minimized or nearly eliminated through the first decade of follow up. The Oxford group reports that over 95% of their implants survive the first decade. Other European surgeons have reported results in line with the findings noted by the Oxford group.

However, as mentioned, the implant has been available to U.S. surgeons for routine implantation only since April 2004. And until we have long term follow up using strict standards of evaluation in this country there will be some wariness regarding these European results. Not all seemingly good European ideas have in the past stood the test of strict scientific American scrutiny over time.

The partial (hemi) knee replacement is an inherently appealing option for the treatment of isolated medial compartment arthritis of the knee. As opposed to the full tricompartmental knee replacement, the hemi replacement preserves the anterior cruciate ligament. The result is the maintenance of normal knee stability leading to a joint that feels more “normal”. The hemi knee replacement is more amenable to minimal incision surgical techniques thus shortening the hospital stay and the rehab and recovery period. Compartments of the knee unaffected by the arthritic process are preserved.

Historically the risks of conventional uni replacements have included a greater risk of early implant loosening and of the possibility of accelerated polyethylene (plastic) wear. The Oxford Mobile Bearing Partial Replacement addresses these risks by its unique design features. European data thus far demonstrates the successfulness of the mobile bearing design. Further follow up in this country is needed to confirm this. However, the mobile bearing design of the Oxford Knee does physiologically make sense and hopefully will become the surgical procedure of choice for patients with isolated medial compartment arthritis of the knee.