As the average age and life expectancy of the population has increased, so has the prevalence of hip fractures. Intracapsular hip fractures, also known as femoral neck fractures, as well as intertrochanteric femur fractures are the two most common patterns of hip fractures. There are roughly 280,000 hip fractures diagnosed and treated in the United States annually, and this number is expected to reach 500,000 by the year 2040. The management of these two types of hip fractures is estimated to cost more than eight billion dollars annually.

Diagnosis of hip fractures is fairly straight forward. Typically patients will experience a fall, either from a standing position or out of bed, and complain of immediate pain and difficulty bearing weight. Commonly patients may also suffer an insufficiency fracture wherein they experience pain in the hip and then fall. They are usually brought to the emergency room where radiographs reveal either a femoral neck fracture or an intertrochanteric femur fracture. The classification scheme is fairly simple for both of these fractures. Essentially you have either a displaced or nondisplaced femoral neck fracture (garden classification 1 through 4) and intertrochanteric fractures are also classified as either displaced or nondisplaced (based off of the AO fracture classification).

Treatment of both intracapsular hip fractures and intertrochanteric fractures is based mainly on fracture pattern and degree of displacement. With nondisplaced femoral neck fractures, the tenuous blood supply to the femoral head, which begins in the basicervical region, should be relatively undamaged. For this reason, the treatment of choice is cannulated screw fixation with a triangular pattern of three large cancellous screws. This will allow a high likelihood of fracture union and successful outcome. Unfortunately, if the femoral neck fracture is displaced the blood supply to the femoral head will be damaged. If reduction and cannulated screw fixation is attempted, there is greater than a 50 percent likelihood that the femoral head will progress to avascular necrosis. For this reason, the treatment of choice is prosthetic replacement of the femoral head and neck. This can be accomplished either with (total hip arthroplasty) or endoprosthesis placement, which includes either a unipolar or bipolar prosthesis. Most commonly a bipolar endoprosthesis is chosen, based on the increased stability and range of motion possible with a bipolar as compared to a unipolar design. However, the results of a prospective randomized study suggest that the bipolar endoprosthesis provides no advantage in quality of life and functional outcomes. Total hip arthroplasty is the treatment of choice in patients who have advanced arthritic changes in the acetabulum. The disadvantage to total hip arthroplasty treatment is related to stability. There is a significantly decreased dislocation rate with endoprosthesis placement compared to total hip arthroplasty.

There are a number of potential complications associated with the treatment of femoral neck fractures including osteonecrosis, nonunion, failure of fixation, infection, and systemic complications. Osteonecrosis, as stated previously, occurs in almost a 50 percent of patients with a displaced femoral neck fracture. Obviously with an endoprosthetic replacement, there is no risk of osteonecrosis since the femoral head has been replaced. The reported incidence of nonunion in all femoral neck fractures, including displaced and nondisplaced fractures, ranges from 10 percent to 30 percent, and this should be evident within the first year after the injury. If nonunion were to occur, frequently failure of fixation will occur. The patient will begin having groin pain and radiographically there will be a nonunion and the implants could fracture. One of the most disconcerting problems is infection. Antibiotics are given before, during and after surgery in an effort to keep infection rates to a minimum. In the elderly population urinary tract infection is one of the most common sources of hematogenously spread prosthetic infections. Obviously, mortality is the most devastating systemic complication. Unfortunately, elderly patients who sustain a hip fracture have a mortality rate at one year ranging from 14 percent to 36 percent with 50 percent of those who survive losing their ability to walk independently. The most important factors influencing mortality are cardiac risk factors, such as coronary artery disease, nursing home residences, chronic pulmonary disease, pneumonia, and duration of surgery.

Intertrochanteric fractures frequently occur in older patients and effect approximately 150,000 patients every year in the United States. The diagnosis once again is relatively straight forward with patient injury and radiographic evaluation. With both intertrochanteric fractures and femoral neck fractures, there is a risk that a stress fracture could be present, which will not show up on plain radiographs. The diagnosis of an occult hip fracture is most accurately and quickly assessed with an MRI. An MRI is capable of diagnosing an occult fracture within hours of the injury. A bone scan requires 72 hours from the time of fracture in order to accurately assess whether there is a fracture.

Treatment of intertrochanteric femur fractures once again is based on displacement and can range anywhere from nonoperative to operative care. Nonoperative treatment in both femoral neck and intertrochanteric femur fractures is only indicated in the most medically unstable and non-ambulatory patients. With nonoperative treatment, the risk of secondary medical complications, such as DVT, pneumonia, and decubitus ulcers and places the patient at significant risk. Operative treatment of intertrochanteric fractures requires anatomic reduction for optimal outcome. Implant choices range anywhere from an intertrochanteric nail to compression hip screw with side plate, to a calcar-replacing total hip arthroplasty. Treatment with compression hip screw is the most common implant currently; however, intramedullary nails are becoming more popular. Total hip replacement in intertrochanteric fractures is much less predictable than in femoral neck fractures, so this is a last choice option. Given the elderly population in which this occurs, there are some arguments for bone reinforcement with substances like calcium phosphate cement paste and cement used for joint replacement surgery. 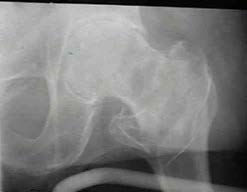 The same potential complications that occur in the treatment of femoral neck fractures can occur also in intertrochanteric femur fractures. These include failure of nonunion, fixation and infection. Unfortunately, if nonunion or failure of fixation does occur, they only option for salvage is a calcar replacing total hip arthroplasty. In the patient population results of this procedure are less than optimal.

In conclusion, hip fractures are a serious injury in the elderly population. There is a very mortality rate and morbidity rate following hip fractures in the elderly. Once diagnosis has been made, appropriate stabilization of the patient from a medical standpoint and rapid operative fixation of the fracture or prosthetic replacement helps patients obtain a better functional result. Adequate rehabilitation in an inpatient setting, as well as at the patient’s home with home health is an important adjunct to an overall successful outcome.