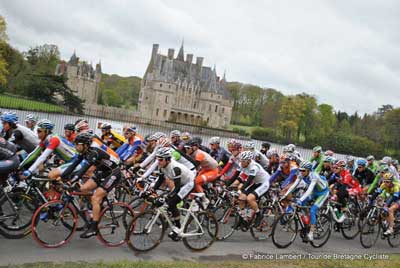 The pro peloton is a dangerous place to hang out. Just ask Rob Bush, member of the Garmin Slipstream professional cycling team. Even highly skilled professional racers have accidents. High speeds and close proximity can spell disaster especially when riders take chances to win a race. Prior to securing a position with the Garmin team Bush was racing at the elite collegiate level when he was driven into barriers at over 30 miles per hour during a race at Notre Dame. While the shoulder is built to withstand a lot of force a direct blow to the shoulder after a hard fall on pavement can frequently lead to a severe break in the midshaft of the collarbone. This is exactly what he sustained. With just eight weeks until the USA Cycling National championships this put the rest of his season in jeopardy. Needless to say he was looking for treatment that would allow for a swift and safe return to training and eventually full competition. 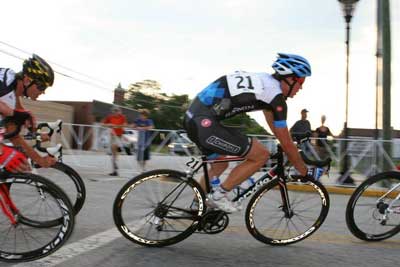 The clavicle is an S-shaped bone that functions as a support between the chest and the shoulder. It’s commonly broken accounting for 4-10% of all adult fractures. The most common mechanism of injury is a direct blow to the shoulder. Motor vehicular trauma causes 70% of all clavicle fractures. The remainder is frequently associated with sports injuries like cycling accidents, falls while skiing, or playing team sports such as football and hockey. Seventy-five percent of all clavicle fractures occur in the middle third. This portion of the clavicle is thinner and less supported than the rest of the bone. Lateral (outer) third fractures occur 25-30% of the time and medial (inner) third fractures only 2% of the time. Fractures often lead to a shortening of the distance between the shoulder and chest. This can ultimately affect function of the arm and leave an obvious deformity with tenting of the skin.

Nonoperative treatment has been the standard of care for midshaft clavicle fractures for years as a majority of these fractures heal in a figure eight brace or sling. Recently, however, new studies are exposing some of the problems associated with nonoperative treatment of certain clavicle fracture patterns. Certain fracture patterns have a high chance of delayed union or nonunion prolonging the recovery process and sometimes leading to additional complex surgery. In 2007 the Canadian Orthopedic Trauma Society reported on a multicenter prospective trial of 132 patients that had midshaft clavicle fractures treated either nonoperatively or with plate fixation. Healing was quicker (16 weeks versus 28 weeks) and functional scores were higher in patients that were treated surgically with a plate to hold the break versus those treated non-operatively. Additionally, the nonunion rate was 3 times higher in the nonoperative group. These results were supported by another prospective study that found nearly one out of three patients developed a nonunion and 36% reported a symptomatic malunion in the nonsurgical group while the surgical group did much better. Surgery is not without risk however. Patients can develop hardware irritation, incisional numbness, and have at least some risk of infection. One study reported a 12% reoperation rate after clavicular plating.

Advances in technology have lead to significant improvements in the fixation devices available for clavicle fracture fixation. Years ago, surgeons had to bend pelvic reconstruction plates to try and make them fit the collarbone. This was time consuming and had the potential for weakening the plate. Now there are a number of companies that offer anatomic precontoured plates with the ability to use locking and non-locking screws to fix the bone. This makes the surgery both safer and more efficient to perform. These plates also have a lower profile. This feature decreases the likelihood of local irritation from the plate and need for subsequent plate removal. This new technology allows for an earlier return to activities and higher patient satisfaction rates. 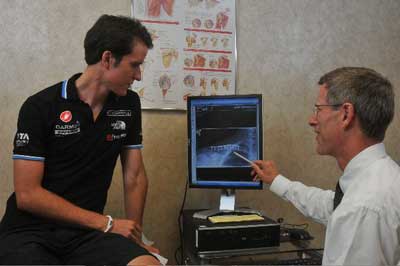 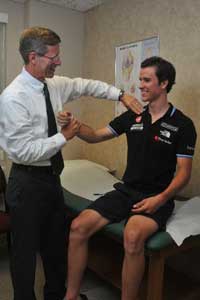 Before any decision is made the surgeon must consider the patient’s activity level, location of the injury, degree of displacement, shortening, and comminution (number of bone fragments). Minimally displaced or shortened fractures will likely do well with nonsurgical treatment. The studies above suggest patients with displaced fractures that have 2cm (approximately ¾ – 1 inch) of shortening have surgery to correct the problem. If a patient has an open fracture or associated neurovascular injury requiring exploration, surgery is recommended as well. Other indications include multiple extremity injuries, seizure disorder, and extreme tenting of the skin, and high demand athletes looking to minimize their downtime while the fracture heals.

Bush’s fracture demonstrated significant displacement and shortening. He also wanted to be able to safely train on an indoor trainer to keep his fitness up while the fracture healed. He underwent successful surgical repair with a specialized clavicle plate and screws to hold the bones in an anatomic position. 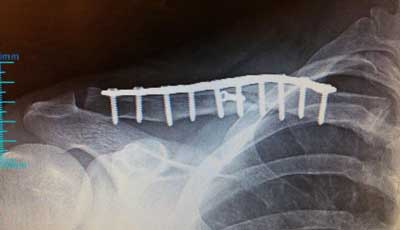 With the fracture stabilized he was able to return to the 2-6 hours of riding a day required to regain competitive form. He quickly regained his shoulder motion and arm strength. Follow-up x-rays confirmed healing and he was released to race 8 weeks after repair. Bush then traveled out west to compete in USA Cycling’s Elite U23 Championships.

With no expectations beyond simply competing, Bush found himself in a breakaway from the main group with only a few laps to go. When the time was right he made his move and outsprinted the completion at speeds close to 40 MPH to secure the first of his two national championship wins! Talent, dedication and hard work along with some modern technology got Bush back to top form! 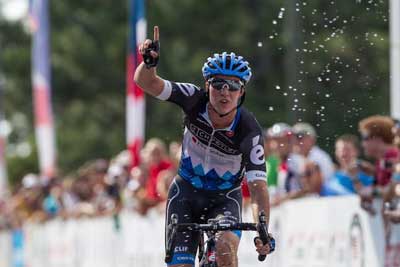